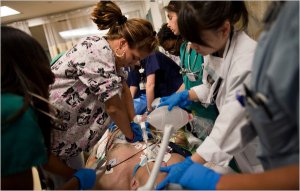 In all my reading and social media contacts I found nothing that honored the nurses and their heroic contributions during the attacks on 9/11.

I want to thank the brave nurses, medics and all the medical staff that worked nonstop to provide life-saving care on that day. We, as nurses forget to give a shout out to who we are in the realm of service and protection of others. One article, Nurses on 9/11 written by Kristen Rothwell,  gives a detailed account of the nurses role that day. I can see the NYC conference building, the Jacob K. Javits Convention Center, which had been set up as a giant triage and emergency center becoming like a MASH unit.

As the most plentiful of providers, nurses play a huge part in patching the wounded and comforting the survivors, not only on that day but in the months and years that followed this disaster. Remember the nurses of 9/11.

The Nurses Nurse, an RN-owned organization assisting fellow RNs in career management and advocates for the recognition and advancement of the nursing profession.Created by Rita Batchley, BSN, RN a professional with 25 years of nursing experience, her motivational materials are designed to increase job satisfaction and enhance healthcare practices. View more posts

One thought on “Nurses are First Responders Too”